(Update and Details of December 17 Story)
At 1:20 p.m. on December 16, the Washington Parish Sheriff’s Office received a report from a man that he went home for lunch and discovered his wife, his firearm collection and their vehicle was missing. WPSO deputies and detectives responded, along with officers from the Franklinton Police Department, the Louisiana Department of Probation and Parole, the Louisiana Department of Wildlife and Fisheries and the Rayburn Correctional Center canine team.  After about thirty minutes, a Probation and Parole officer located the vehicle and the female victim on a hunting club road. The vehicle had become stuck in mud and the suspect fled into the woods.
Officers converged on the area, searched the woods, and located Devonta Miller (17) of Franklinton.  He was into custody without incident. He was carrying three pistols and a mask and was still wearing latex gloves he used to avoid leaving fingerprints or other evidence. The arrest came within an hour of the complaint being received by the Sheriff’s Office. During subsequent interviews, Miller confessed to the crimes.
It was determined that Miller, posing as a package delivery person, pushed his way inside at gunpoint, pulled the mask over his face, tied up the victim, stole numerous firearms located in the house, abducted the victim, and sped away.  After turning onto the hunting camp road, Miller stopped the vehicle and sexually assaulted the victim.
It was further determined that Miller was assisted by Robert J. Lester (48) and Victoria Lester (18), both of Washington Parish.  Robert J. Lester prepared the fake delivery box, brought Miller to the residence, followed Miller when he left the residence, and picked up the stolen firearms as Miller threw them out of the vehicle.  Robert J. Lester confessed to his part in the crimes.
Victoria Lester met Robert J. Lester, her uncle, who asked her to help him find a location to hide the stolen weapons. The niece identified an abandoned residence in a rural area near Franklinton where she and her uncle took the weapons and hid them. Once the location of the weapons was identified, Sheriff’s Office detectives were able to retrieve them. At this time, there is no reason to believe Victoria Lester was aware of the crimes which had been committed by Miller and her uncle. 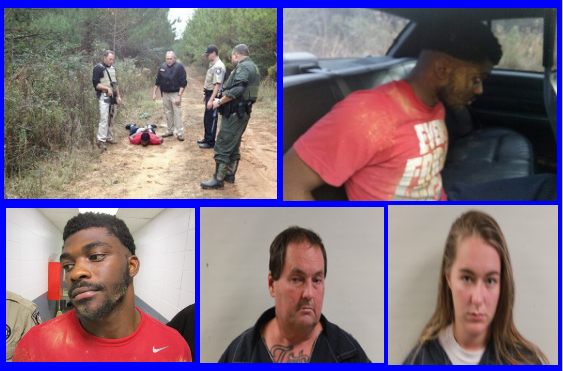