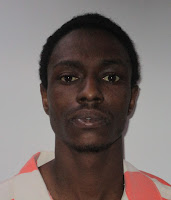 Yesterday (January 13, 2021), Washington Parish Sheriff’s Office Deputy Jay Dupre responded to a call for assistance west of Bogalusa. Arriving at the residence, Sgt. Dupre discovered the homeowner had been physically attacked by an intruder who had fled the scene. The intruder was identified as Damion J. Smith, age 29 and a resident of Highway 60.

Patrolling in the area, Sgt. Dupre encountered a person who fit the description given to him. The man admitted to being Damion Smith and gave statements verifying what Sgt. Dupre had been told previously. Sgt. Dupre advised Smith he was under arrest and attempted to place Smith in handcuffs. Smith pulled away, shoved Sgt. Dupre, and ran away. Sgt. Dupre pursued Smith on foot and caught up with him. As the two struggled, they rolled into a water-filled ditch and Smith continued to assault Sgt. Dupre until he was able to be restrained.

Bogalusa Police Department Officer Dillon Miller arrived to assist and transported Smith to the Bogalusa jail where he was detained before being transferred to the Washington Parish Jail. Washington Parish Sheriff’s Office Detective Chad Cassard responded to the residence where the assault occurred to manage the investigation.

Smith was booked into the Washington Parish Jail on charges of home invasion, domestic abuse, criminal damage to property, cruelty to a juvenile, resisting an officer by flight and resisting an officer with force. (According to the WPSO website, bond has been set at $2750.00.)

“It is never a good thing when someone physically resists arrest,” stated Sheriff Randy Seal. “It is always a good thing when the officer is able to control the situation with no injuries to either party. Many thanks to Sgt. Dupre for making this arrest, Bogalusa officer Miller for assisting, and to Detective Cassard for following up with the investigation.”