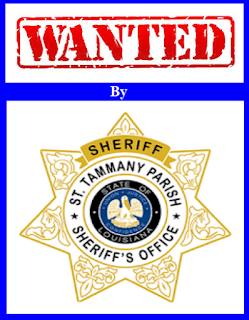 Chalmers Latrell Gillin, age 37 and a Slidell-area man, is wanted in connection with a shooting that occurred Tuesday (November 17, 2020) night near Slidell.

At approximately 10:30 p.m. Tuesday, St. Tammany Parish Sheriff’s deputies were dispatched to the 2100 block of Bluebird Street in reference to gunshots. The subsequent investigation revealed that a family dispute at a residence on Bluebird Street escalated into a fight, and numerous shots were fired at a vehicle occupied by two of the individuals involved in the dispute. One of those individuals sustained a single non-life threatening gunshot wound and had left the scene prior to deputies’ arrival. He was located by deputies at an area hospital, where he was being treated for his injuries.

Warrants have been issued for the arrest of Chalmers Latrell Gillin, in connection with the incident, on the charges of Aggravated Assault with a Firearm, Aggravated Criminal Damage to Property, Illegal use of Weapons or Dangerous Instrumentalities, and Possession of Firearm by Person Convicted of Certain Felonies.

Anyone with information about the whereabouts of Chalmers Latrell Gillin is asked to contact the St. Tammany Parish Sheriff’s Office at (985) 898-2338.

This is an ongoing investigation, and no additional information will be provided at this time.