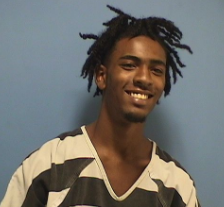 The St. Tammany Parish Sherriff’s Office arrested Christian Bickham, age 19 and of the Slidell-area man, in connection with an armed robbery that occurred Monday (November 16, 2020) morning near Slidell.

STPSO deputies were dispatched to a gas station near the intersection of U.S. Highway 11 and Powell Drive at approximately 7 a.m. Monday after a customer reported he had been robbed at gunpoint while leaving the store. The victim told deputies a man who was armed with a small handgun approached him while he was exiting the store and demanded his wallet. The man, later identified as Christian Bickham, reportedly took the victim’s wallet and fled on foot into a wooded area behind the gas station.

Bickham was successfully apprehended about an hour later, after fleeing and hiding in the heavily wooded area. He was booked into the St. Tammany Parish Jail on the charges of Armed Robbery and Resisting an Officer.

“This individual was apprehended due to the fast response time of our deputies, who were able get on scene quickly and establish a perimeter, ultimately taking this dangerous individual into custody,” Sheriff Randy Smith. “As always I applaud the work of our deputies.”