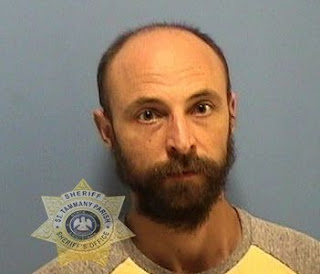 The St. Tammany Parish Sheriff’s Office has arrested a Mississippi man on an attempted first-degree murder charge following an investigation into an incident that occurred involving a Mandeville-area juvenile.

In late August, St. Tammany Parish Sheriff’s detectives began an investigation after an 8-year-old male claimed Jared Davis (age 38) had attempted to strangle him while at his residence in Mandeville. The month-long investigation resulted in a warrant being issued for Davis’ arrest.

A warrant was also issued for the arrest of the child’s mother on the charge of Accessory After the Fact for aiding and abetting Davis after the crime was committed. She was picked up at her Mandeville-area residence on September 25, 2020 and booked into the St. Tammany Parish Jail. Davis was picked up at a family member’s residence in Stone County, MS. on September 25, 2020 and booked into their jail as a fugitive. On September 29, 2020, Davis was transported to the St. Tammany Parish Jail where he was booked on the charge of Attempted First-Degree Murder.

The juvenile was placed in the custody of a family member.

Due to the case involving a juvenile, no additional information will be released.

“It is certainly a tragedy anytime a child becomes a victim of domestic violence,” Sheriff Randy Smith said. “Our deputies will continue to work tirelessly to bring those responsible to justice.”