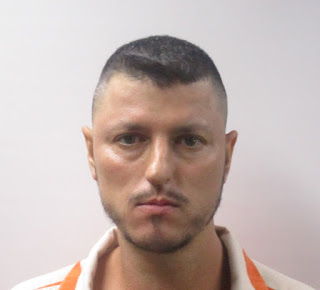 On October 2, 2020 Washington Parish Sheriff’s Office Deputy Mitchell NeSmith was dispatched to the Bogalusa Police Department to pick up an inmate being held in the Bogalusa City Jail. The inmate, Keith Jeffrey Gerald, a thirty-four year old resident of Avenue H, was wanted on two outstanding warrants.

One warrant, issued by the Louisiana Attorney General’s office, charges Gerald with pornography involving juveniles under the age of thirteen. The other warrant, from the Sheriff’s Office, charges Gerald with telephone harassment, a charge dating to May 24. Gerald was transported to the Washington Parish Jail and booked on the two charges. His bond is set at $200,000.

The telephone harassment charge resulted from a complaint investigated by Washington Parish Sheriff’s Office Deputy James Gregorio. Two parish citizens had received texts from Gerald in which he threatened to harm them. Additionally, one of the victims reported that she had also received a threatening telephone call from Gerald. Based on evidence, Deputy Gregorio secured a warrant for Gerald’s arrest from a 22nd Judicial District Judge.

Gerald’s record indicates one previous stay in the Washington Parish Jail. In February 2012, he was arrested in Angie by then WPSO Sergeant Roy Lee and booked on a charge of being a felon in possession of a firearm.

“I’m not certain what motivated Gerald to threaten other persons,” stated Sheriff Randy Seal. “Obviously, though, he has some unresolved issues, as indicated by the warrant from the Attorney General as well as his actions in May. We are always pleased to assist the Attorney General’s Office. They are a good crime fighting partner.”