Neighbors Steal From Neighbors – Arrests Made 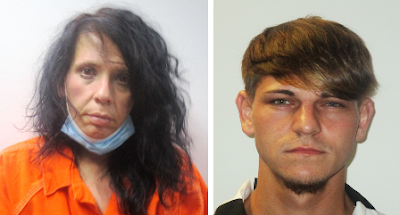 Yesterday (Wednesday, September 16, 2020), Washington Parish Sheriff’s Office Deputy James Gregorio responded to a report of theft from a residence on Highway 436. The homeowner was in the process of moving out and when she returned to obtain more property, she noticed the house had been broken into and several items were missing. Deputy Gregorio took the report and asked the homeowner to call again if she discovered additional items were missing.

Later in the day, the homeowner called again and Deputy Gregorio and Lt. Michele Clayton responded to the residence. Evidence left behind at the victim’s residence led the officers to the house next door. They went to the next door neighbor’s house and were unable to get anyone to come to the door, although they could hear someone moving around inside the house.

Detective Chad Cassard and Detective Captain Tom Anderson responded to the scene to assist in the investigation. Captain Anderson obtained a search warrant for the neighbor’s residence from a 22nd Judicial District Court Judge and all officers, assisted by Lt. Brent Goings and Detective Kevin Bond, made forced entry into the house and arrested an occupant, Shanda Honaker (44), who gave her address as Bush, Louisiana, with a previous address of Military Road in Varnado.

As the officers were thoroughly searching the residence, they discovered Stephen Kyle Brumfield (26), hiding in the attic. Brumfield, who gave an address on Lee Road, was also arrested. The continued search of the residence, the attic and a vehicle belonging to Brumfield resulted in the discovery of illegal drugs and paraphernalia as well as items stolen from the victim’s residence.

Brumfield’s jail history in Washington Parish began with an arrest in 2012 for aggravated rape and aggravated incest. This was followed by a 2013 arrest for driving while intoxicated and a 2016 arrest for possession of illegal drugs. In 2019, he was remanded to the jail by the 22nd Judicial District Court. His most recent arrest marks his fifth stay in the Washington Parish Jail.

“Brumfield and Honaker were anything but good neighbors,” stated Sheriff Randy Seal. “They displayed very poor judgment from the beginning to the end of this entire episode and are good examples of who should be in jail. Congratulations to Deputy Gregorio, Lt. Clayton and all of our detectives for a job well done.”