Disturbance 1. Tropical Storm Marco, previously known as Tropical Depression Fourteen, is moving north-northwest near 12 mph and move over the central Gulf of Mexico toward the northwestern Gulf on Sunday and Monday followed by a track toward the northwestern Gulf coast Tuesday. Marco could be near hurricane strength when it moves over the central Gulf of Mexico Sunday night and early Monday.

Disturbance 2. Tropical Storm Laura, previously known as Tropical Depression Thirteen, is moving toward the west near 21 and will move near Puerto Rico this morning, near or over Hispaniola this afternoon and tonight and near or over eastern Cuba Sunday and Sunday night. After that, the models have potential landfall locations along the Gulf coast from the Florida Panhandle to the middle Texas coast.  One complicating factor is the potential for interaction with Tropical Storm Marco.Laura could bring storm surge, rainfall, and wind impacts to portions of Cuba, the Bahamas, and Florida early next week and the northern U.S. Gulf Coast by the middle of next week.

Disturbance 3. A tropical wave near the the Cabo Verde Islands is not expected to develop into a stronger system as it moves westward over the tropical Atlantic. 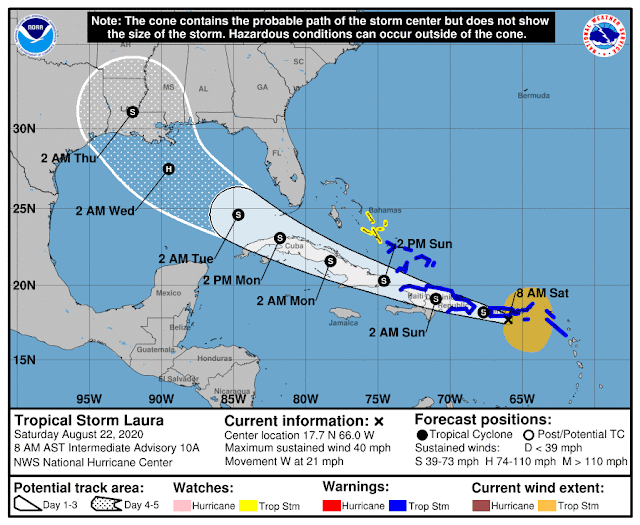