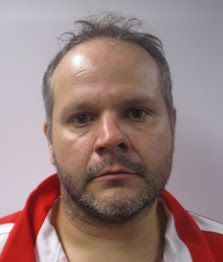 On Wednesday (August 26, 202) while responding to a call south of Franklinton, Washington Parish Sheriff’s Office patrol deputy Norman Taylor learned that Christopher Lee Risner, age 39 and a resident of Johnson Street in Franklinton, had held a female against her will, all the time threatening to harm her with a knife, hitting her and choking her. After gathering facts in the case and examining physical evidence, Deputy Taylor obtained an arrest warrant from a 22nd Judicial District Judge.

With assistance from the WPSO Drug Task Force and Franklinton Police Department, Risner was located on Eldridge Magee Road and taken into custody without incident. He was transported to the Washington Parish Jail and booked on charges of aggravated battery, false imprisonment while armed with a weapon and violation of parole.

Risner was first introduced to the Washington Parish Jail in 2008 when he was booked on charges of driving while intoxicated, driving under suspension and resisting an officer. His next arrest was on 2011 on charges of aggravated rape, false imprisonment, kidnapping, battery, two counts of distribution of illegal drugs, three counts of possession of illegal drugs, issuing worthless checks and two counts of failure to appear in court.