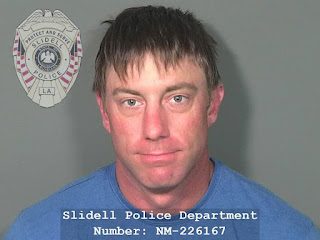 choking his estranged girlfriend’s dog, due to an argument.

The incident happened on Sunday (May 10, 2020) at an apartment complex on Spartan Drive. After choking the dog, 30-year-old Shane Michael Mitchell  of Arnaudville, LA, took the canine and refused to return her to its rightful owner. Slidell Police were notified early Monday morning and immediately opened an investigation into the matter. Based off the video, Slidell Police detectives secured an arrest warrant for Mitchell for Cruelty to Animals. A court order was also secured ordering the canine, Rubyjean, back to her rightful owner.

Investigators received information that Mitchell may have been at an apartment complex in Slidell or fled to the Baton Rouge area. Mitchell refused to cooperate with authorities, so several undercover detectives set up surveillance in an attempt to locate Mitchell. Shortly before 11:00 a.m. this morning (May 12, 2020), Mitchell was located at an apartment complex on Oak Harbor Boulevard and was taken into custody without incident. Police located Rubyjean safe and sound and reunited the canine with her rightful owner.

Slidell Police Chief Randy Fandal says, “I was sick to my stomach watching that video. How someone can do hurt a defenseless animal is beyond me. I had the opportunity to meet Rubyjean this afternoon, and she was as sweet and well-mannered as could be. We are glad this had a happy ending for both the dog and her owner.”

Mitchell is currently being held at the Slidell City Jail. The investigation is on-going, and additional charges could follow in reference to other incidents.
at 5/12/2020 04:11:00 PM