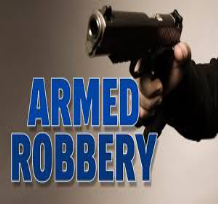 after he reportedly robbed an acquaintance at gunpoint.

Malonson reportedly called the victim and her friend Thursday morning (May 14, 2020), needing a ride from the Hammond area to the Shady Pine Mobile Home Park near Slidell. When the three arrived at the mobile home park, Malonson produced a handgun and robbed the victim, taking a prepaid credit card from her purse before entering one of the mobile homes. The victim drove to another location and called authorities.

STPSO deputies located Malonson at the mobile home park, and he was taken into custody. A pistol matching the description provided by the victim was also located. Malonson was booked into the St. Tammany Parish Jail on the charges of Armed Robbery and Possession of a Firearm by a Convicted Felon.