Ponchatoula PD Officers responded to a call of multiple gunshots being heard in the area of N. 2nd 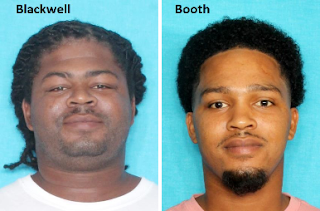 Street and E. Hickory Street at approximately 10:30 pm on Monday night. No one was injured in the shooting, but nearby residential property was damaged by the bullets.

After investigating the incident, Ponchatoula Street Crimes Unit determined that there were two shooting suspects that drove by aiming at a certain individual. The shooters were identified as Jonathan Blackwell and Lee Roy Booth Jr. Warrants for these subjects were obtained and later executed in Hammond with the help of Hammond Street Crimes Unit and Hammond SWAT.