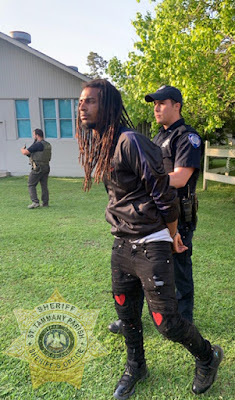 The St. Tammany Parish Sheriff’s Office has arrested a Slidell-area man in connection with a homicide that occurred Thursday (April 23, 2020) at a residence in the 59000 block of Shady Lane in the Slidell area.

Shortly after noon, deputies were dispatched to the residence after an individual identified as Rueben “Rambo” Patrick Cousin (23) stabbed another man during an altercation at the home. Deputies located one victim with what appeared to be two stab wounds. He was transported to a local hospital where he succumbed to his injuries.

Cousin had fled the scene prior to deputies’ arrival, and a warrant was issued for his arrest. He was located, with the assistance of the U.S. Marshal’s Fugitive Apprehension Task Force, in the Lacombe area at approximately 6 p.m. and was taken into custody. Cousin was charged with Second Degree Murder.
at 4/24/2020 04:15:00 PM