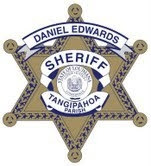 Sheriff’s deputy who was shot in the leg early this morning (March 16, 2020) while attempting to apprehend a wanted subject.

Around 2:30 a.m., two deputies responded to a residence off of Booker II Rd. in Hammond to execute an arrest on a subject accused of committing a home invasion. During the contact, a brief struggle ensued resulting in one deputy being shot. Although injured, he and the other deputy managed to gain control of the subject. The deputy was treated at a local medical facility and released.

“I am proud of the actions and bravery of our deputies this morning. This incident demonstrates the unquestionably dangerous line of work that law enforcement encounter each day. Our deputies are faced with split-second decisions and have to react in the appropriate manner," Edwards says. "We are blessed by this outcome. This situation could have ended much worse,” he continued.

Details surrounding this incident are under investigation and will not be released at this time. We ask that you keep the TPSO, our deputies and their families in your prayers.
at 3/16/2020 10:11:00 AM