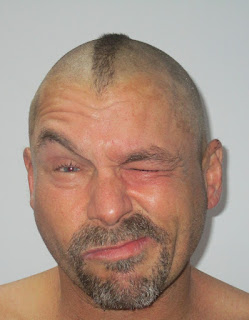 Late in the evening of February 11, 2020, Washington Parish Patrol Deputy John O’Hern responded to a report of a home invasion in a rural area south of Bogalusa. Deputy O’Hern learned that the female occupant of the home was startled by someone kicking in the front door. The male subject then entered the house and, seeing the homeowner, fled out the back door.

As Deputy O’Hern was conducting the investigation, a call came in from another nearby residence that someone had attempted to gain entrance to that house. Deputy O’Hern relocated to that residence and located a subject in the woods adjacent to the house. He was able to arrest the person without incident and both homeowners identified him as the person who was at their respective houses.

Timothy Wells (43), a resident of Rayford Seals Road, was arrested and transported to the Washington Parish Jail charged with home invasion. He remains in the jail with his bond set at $20,000.

“Another knucklehead safely out of our community and into our jail,” stated Sheriff Randy Seal. “Situations like this always have the potential of being dangerous. This time, no one was injured, and for that we are grateful. Deputy O’Hern’s prompt response and quick arrest likely prevented further incidents. Good job, Deputy O’Hern.”
at 2/18/2020 11:37:00 AM