“I am extremely pleased with the hard work and dedication of all of our employees who have contributed to another year of successful crime fighting which remain well above the national average,” Sheriff Smith said. “The St. Tammany Parish Sheriff’s Office continues to send the message that crime will not be tolerated in our community and criminals will be arrested.” 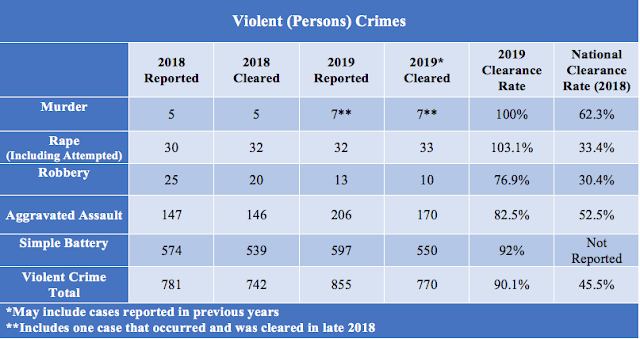 In 2019, STPSO worked six* homicides, all of which have been cleared with arrests.  Those six include a Slidell-area couple who were arrested in connection with the death of their three-month-old child, a Harvey man who was arrested for murder after a man was fatally shot during an altercation at a Slidell-area home, a Pearl River man who was arrested after a man was shot in the driveway of a residence in the River Gardens neighborhood and Slidell man who was arrested after he shot a man following an altercation behind a Slidell-area business.  The six also include the arrest of a Lacombe man, which came after it was determined he was responsible after a woman died at his residence from an overdose, and the arrest of a Madisonville man after he killed his romantic partner Christmas night.

Non-violent crimes as reported to the FBI, include burglary, theft and motor vehicle theft. Several of the reported burglaries from 2019 were recently cleared when warrants were issued and arrests made in a string of residential burglaries that occurred in the Slidell.

Sheriff Smith pointed out that residents can help the agency reduce the number of non-violent crimes, particularly vehicle burglaries (which are reported as thefts) by, removing valuable from parked cars, locking their vehicle doors and calling in any observed suspicious activity.

“Keeping crime rates down is a partnership between law enforcement and the community we serve,” Sheriff Randy Smith said, “and we are blessed to live and serve in an area that respects, appreciates and works with law enforcement.”

Sheriff Smith asks that anyone with information about crimes occurring in our parish, to submit a tip through the St. Tammany Parish Sheriff’s Office website (www.STPSO.com), by calling the narcotics tip line (1-888-GO-2-JAIL), or by calling Crimestoppers. You can remain anonymous and may be eligible for a cash reward through Crimestoppers.