On January 26th, Cub Scout Pack 104 of Franklinton celebrated the outstanding achievements of leaders and youth at the Istrouma Area Council Nashoba District Awards Banquet held at the Bogue Falaya Hall in Covington, LA. Among the many award recipients in the district were Pack 104 Tiger Scout Joseph Kieffer and Cubmaster Nicholas Crawford.

Joseph received recognition for selling over $1000 dollars in product during the annual popcorn fundraiser held district-wide. Pack 104 is incredibly proud of Joseph’s hard work and dedication to Cub Scouts and to his community. 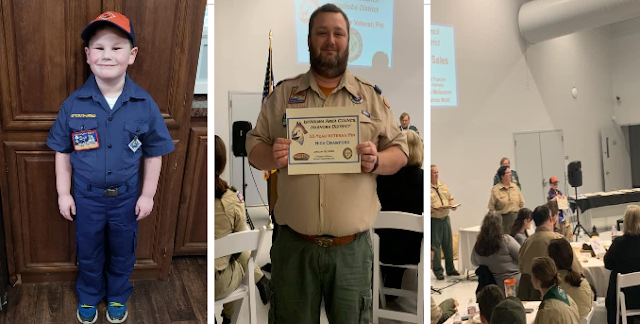 Cubmaster Nicholas Crawford received several accolades for is achievements in Cub Scout leadership, including the Scout Leader’s Training Award and Den Leader Award. He also received his 35 Year Veteran Pin. Pack 104 is grateful to have Nicholas as a valued leader in the local Cub Scouting Program in Franklinton. His many years of leadership and dedicated service to the youth of Washington Parish is greatly appreciated.

Cub Scout Pack 104 proudly serves all youth in Washington Parish. Cub Scouts welcomes both boys and girls to the organization in kindergarten through 5th grade. If you have a child who would like to join Cub Scout Pack 104, please contact Cubmaster Nicholas Crawford at (985) 750-1856 or New Member Coordinator Krissy Haga by emailing pack104.franklinton@gmail.com.
at 1/30/2020 03:56:00 PM