At the Franklinton Board of Aldermen meeting last Tuesday evening (December 10, 2019), reports 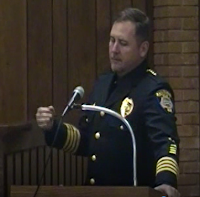 A lengthy discussion was held regarding pay for Franklinton Police Department officers and the department's uniform policy (beginning at 38:00 into view of the meeting). The hourly rate for patrolman was proposed to increase to $14 per hour before certification. Following certification and the probationary period, the hourly rate would increase to $16 per hour. Chief Brown also proposed a change in the uniform policy. In the end, the Board approved both the pay and uniform proposals for the Police Department.
at 12/16/2019 12:00:00 PM