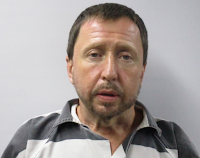 Dupre responded to a report of domestic abuse at a residence on Highway 439. Upon arriving at the scene, officers reportedly discovered a female victim who had been physically abused and held against her will.

Officers arrested Robert C. Vince (48), a resident of the Highway 439 residence. Vince was transported to the Washington Parish Jail charged with aggravated assault, domestic abuse and false imprisonment while armed with a weapon. He is being held without bond due to a hold from the Louisiana Department of Probation and Parole as well as a mandatory court appearance due to the nature of the charges.

“There is never an excuse for domestic abuse,” stated Sheriff Randy Seal. “Although the lady was harmed, I am so pleased her injuries were not serious. This entire situation had the potential of getting out of hand. I’m grateful for the intervention of Sgt. Dupre and Deputy Gregorio, two fine officers.”