Arrest Made in Franklinton Hit and Run With Injuries

On Wednesday (November 6, 2019), the Franklinton Police Department responded to a hit and run 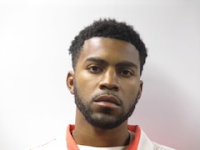 crash with injuries on Hilltop Dr. The victims were transported to  Riverside Medical Center for treatment by relatives. Officers received information the suspect vehicle was described as a black Chevrolet Impala with heavy front end damage and that fled the area. This information was relayed to surrounding law enforcement agencies as well as posted to social media.

During an interview, conducted by Sgt. Jared Stubbs; Brumfield told officers the location of the vehicle and that he was distracted, diverting his attention from the street. Brumfield further stated he panicked and fled the scene after striking the pedestrians with his vehicle.

Brumfield is charged with 2 counts of Negligent Injury, Hit and Run and Failure to report an accident.

Chief Justin Brown would like to thank the public for their assistance in solving this case. Without the continued  support of our community, crimes such as this one may go unpunished. As always, the mutual support of the Sheriff's office and Bogalusa Police Department strengthens our ability to provide the best law enforcement possible. Thanks to the officers who worked expeditiously with the public to bring resolution to this case.

Richard Ducote #75 is THE ONLY INDEPENDENT & QUALIFIED Candidate for District Court Judge!

This is a playlist of videos. Check the menu.
Watch "full-screen".