Two From MS. Wanted for Thefts in St. Tammany

residents are wanted for theft, bank fraud and vehicle burglary.

On September 30, 2019, two subjects entered several local fitness clubs and stole personal items and vehicle keys from multiple victims’ lockers. The two then  burglarized some of the victims’ vehicles in the parking lot of the fitness clubs and made fraudulent charges with victims’ credit cards.

Following a social media post that was made by the STPSO with photos of the two wanted individuals, detectives were able to identify the subjects as DeShawn Magee (19) and Danielle Fountain (19), both from Mississippi. STPSO advises the two are known for committing similar crimes at gyms and fitness centers in Mississippi.

Warrants have been issued for the arrest of both subjects on the charges of Misdemeanor Theft (3 counts), Vehicle Burglary, and Bank Fraud (14 counts). 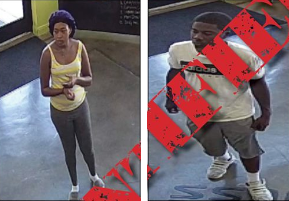 Anyone who has information about their whereabouts or who may believe they are a victim of an unreported crime committed by these individuals, is asked to contact the St. Tammany Parish Sheriff’s Office at (985) 898-2338.

“Thanks to our followers on social media and our partners in Mississippi, these two criminals have been identified,” Sheriff Randy Smith said. “Now that we have their names, if you know where they are hiding, help us find them so they can be placed back behind bars.”