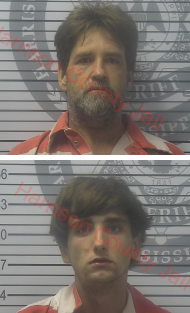 father and son from Long Beach, Mississippi, after they reportedly forced their way into a Slidell-area home last week severely beating a man.

Shortly after 9 p.m. on Wednesday, October 2, STPSO deputies responded to a Slidell-area residence located in the 200 block of Bishop Drive in reference to an aggravated battery. The homeowner told deputies two men had forced their way into his home and attacked him, forcing him, at knife-point, to lead them to another man who was in a shed in the backyard. The intruders then beat the victim in the shed using a metal pipe, striking him multiple times in the head and body before fleeing the residence in their vehicle.

The homeowner refused treatment for his injuries. The second victim was transported to a local hospital where he remains at this time.

Warrants were issued for the arrests of Amos Trehern and Kody Trehern and the two were located late Friday evening (October 4) and arrested by Long Beach Police Department. They were booked into the Harrison County Jail and are awaiting extradition to St. Tammany Parish, where they will be booked on warrants for Aggravated Burglary and Attempted First Degree Murder.

Richard Ducote #75 is THE ONLY INDEPENDENT & QUALIFIED Candidate for District Court Judge!

This is a playlist of videos. Check the menu.
Watch "full-screen".