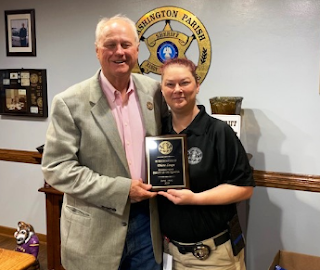 Just before midnight on July 21, jail staff noticed smoke inside one of the facility’s cell blocks. While area firefighters worked to locate and suppress the source of the smoke, the cell block’s 34 occupants were evacuated. Additional areas were later evacuated as smoke spread. There were almost 175 occupants inside the entire jail facility at the time of the fire.

After an assessment of the scene, investigators were able to narrow down the origin of the fire to the cell block’s air conditioning unit. Through further investigative efforts in collaboration with Washington Parish Sheriff’s Office detectives and jail staff, which included obtaining surveillance video evidence, it was determined the fire inside of the A/C unit was intentionally set by the two inmates, Lee and Morales-Guzman. Both were re-booked into the jail on the new charges on Thursday (July 25, 2019).

“At a critical and potentially life-threatening time when the fire was discovered, the shift commander, Deputy Loupe, safely orchestrated the evacuation of all inmates and staff from the jail in an orderly and secure manner,” stated Sheriff Seal. “When first responders arrived on the scene after the alarm was sounded, all inmates were secured in the jail yard under the supervision of jail staff. This is an excellent example of leadership and she exemplifies what public service is all about.”