Have You Seen Me? LDWF is Asking for Public’s Assistance 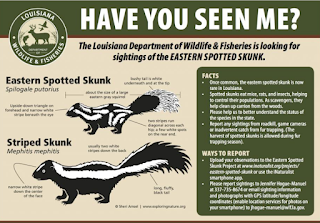 seeks to gather information on the eastern spotted skunk (Spilogale putorius). There has been no confirmed sighting of this species, once common in Louisiana, in more than 30 years. Click the image for a better view.

Anyone who sees the skunk is asked to report the sighting to LDWF. The sightings can be from roadkill, game cameras or inadvertent catch from fur trapping.

“At one time, the eastern spotted skunk was much more abundant than it is now,” said LDWF biologist Jennifer Hogue-Manuel. “We’re hoping that the public can assist us by reporting any sightings of this species.’’

The eastern spotted skunk is about the size of a large eastern gray squirrel. It has an upside down triangle on its forehead and narrow white stripe beneath its eyes. Two stripes run diagonal across the hip with a few white spots on its rear end. Its tail is bushy, white underneath and at the tip.

The striped skunk, easily identified in Louisiana because it is so common, has two white stripes down the back with a long, fluffy black tail.

To report sightings and for more information, contact Jennifer Hogue-Manuel at 337-735-8674.

Editor's Note: I know there will be groups organized to diligently and carefully search for the critter. Please let us know of your efforts and successes!