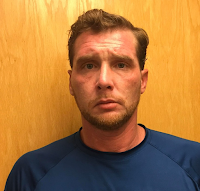 assistance through social media in identifying a vehicle burglary suspect. FPD received numerous calls which led to the identification and subsequent arrest of William Robbie Cutrer (38) of Mt. Hermon.

Later in the day, Sergeant Steve Lang observed a white Toyota SUV in Fred’s parking lot matching the description of the vehicle driven by Cutrer. Cutrer attempted to elude Sgt. Lang by driving out of town across the river bridge. However, Sgt. Lang was able to stop Cutrer and he along with Patrolman Justin Stogner were able to take Cutrer into custody without incident.

Chief Justin Brown commends the exemplary work of Sergeant Lang and Patrolman Stogner. Chief Brown would also like to thank the community for continuing to assist the Franklinton Police Department in keeping our community safe.