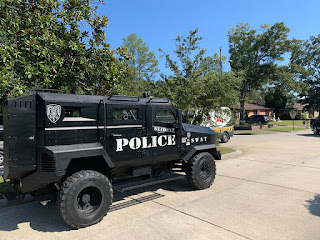 Shortly after 2:30 p.m. today (September 17, 2019), Slidell Police received a 911 call about a man with a gun who was homicidal and suicidal, and possibly holding another man hostage.

The incident took place in the 1500 block of Florida Avenue. Slidell Police officers worked to clear the area to ensure everyone’s safety, while hostage and crisis negotiators worked to make contact with the suspect. Approximately an hour after the initial call, the Slidell Police S.W.A.T. team was successful in taking the man into custody, without incident. No one was injured during the incident. The man was taken to a local hospital for an evaluation. The incident is still under investigation and criminal charges may be filed at a later date.

Slidell Police Chief Randy Fandal says, “As a community, we should be proud of the way our officers handled this situation. At a time when children were getting home from school, our officers ensured everyone’s safety and well-being. Most importantly, the situation was diffused without anyone being injured. It was a great team effort which resulted in a positive outcome.”