Arrest Made in Hammond Fatal Shooting 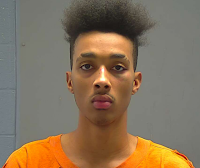 Young (22) of Hammond early yesterday morning (September 21, 2019) on the charge of manslaughter, following a shooting incident on Rogers Road in Hammond, Louisiana.

Shortly before midnight on Friday (September 20, 2019), while deputies were working a security detail in the Emergency Room at North Oaks Medical Center, they encountered two subjects suffering from gunshot wounds. While investigating the incident, Tyrius Young told deputies that he was involved in a physical altercation with one of the subjects, Adrius “AJ” Warren (19) of Independence, when a handgun he was holding accidentally discharged as he was being punched by Warren and Warren was shot in the chest. Young's mother, who was present at the scene of the altercation, was also accidentally struck in the hip by stray gunfire. Both gunshot victims were transported to the medical facility by friends or family members.

Warren was immediately rushed into the operating room but succumbed to his injuries shortly after 1:00 am. Young's mother was treated and released.