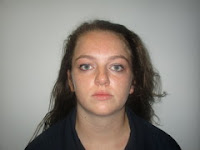 near Franklinton when he observed a vehicle traveling at a high rate of speed. Deputy Taylor made a traffic stop near the Lawrence Creek Bridge, and upon his  approach to the driver’s side window, Deputy Taylor detected a strong smell of marijuana. When questioned, the female driver admitted that she had smoked marijuana recently.

“Another example of an alert patrol deputy,” stated Sheriff Randy Seal. “When our officers stop someone for speeding, they never know what the outcome will be. Thanks, Deputy Taylor, for a job well done.”