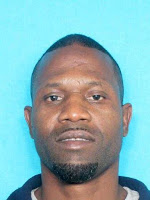 (48) of Franklinton guilty Wednesday (June 12, 2019) of false communication with the intent to cause an emergency response for an incident involving an ex-girlfriend.

District Judge William H. Burris is set to sentence Tate on August 14, 2019. The charge carries a maximum penalty of up to five years in prison. Tate has six prior felony convictions, including distribution of cocaine, false imprisonment while armed with a dangerous weapon, and first degree robbery. He is facing additional time if he is sentenced under state statute as a multiple offender.

Tate’s conviction Wednesday was for an incident that began after 10 p.m. on March 18 this year, when Tate forced his way into his ex-girlfriend’s residence and got into a fight with her current boyfriend. Once Tate was forced out of the house, he called 9-1-1 about 10 times, making allegations about his ex’s new boyfriend, which were determined to be false. Tate accused the boyfriend of having a shotgun and an assault rifle. Prosecutors alleged Tate made the repeated calls to get the new boyfriend arrested and out of his ex’s life.