The St. Tammany Parish Sheriff’s Office was looking for a man after responding to a burglary in 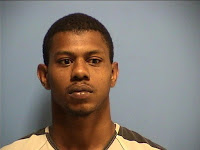 progress on Darby Drive off Rosewood Drive near Folsom on April 15, 2019. Deputies located a black male, approximately 5’11 to 6’1 hiding inside the residence. The individual fought with deputies and escaped. He was last seen running toward the area of Chenel Farms.

STPSO deputies, along with officers from the Folsom Police Department, troopers from State Police and representatives from the U.S. Customs and Border Protection set up a perimeter in an area where they believed the subject was hiding.

Well, STPSO K9 Thor located him Monday night (April 15, 2019). Afterwards, Dakota Cyprian (25) of Folsom was transported to a local hospital, where he was treated for a dog bite.

Upon his release, Cyprian was booked into the St. Tammany Parish Jail on the of Resisting a Police Officer with Force or Violence (3 counts), Aggravated Burglary with Battery, and Attempt to Disarm a Police Officer.

The investigation is ongoing, and additional charges are possible.