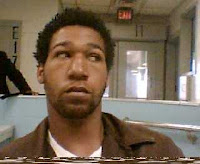 began investigating a shooting that occurred outside of the Mr. J's Lounge located on Bennett Road in Amite, Louisiana. Upon arrival, detectives located Larry Anthony Davis, Sr. (50) suffering from gunshot wound(s) and he was subsequently pronounced dead at the scene.

This death is reportedly the result of an altercation between Davis and Jerome Ricks (33), whose last known address is 1032 Deslonde Street New Orleans, Louisiana. During the altercation, Ricks is accused of brandishing a handgun and shooting Davis before fleeing the scene.

A warrant has been issued charging Ricks related to Second Degree Murder. TPSO reports that Ricks should be considered armed and dangerous, that Ricks has an extensive criminal history including weapons and narcotics charges, and that Ricks was last released on parole on October 29, 2018 for Armed Robbery.

Anyone knowing the whereabouts of RICKS is asked to contact Crime Stoppers at 800.554.5245.

Sergeant Jacob Schwebel and Detective Terry Lane are the lead detectives on the case.