On Wednesday night (November 21, 2018) the Bogalusa Police Department received a call about a 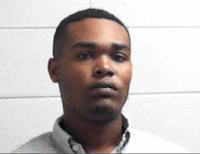 shooting at the Power Food convenience store on Sullivan Drive. Responding officers found a 17-year-old deceased male with a gunshot wound in the front passenger seat of a vehicle. The BPD Detective Division was called out to investigate the incident.

After investigating the incident and talking to witnesses, the BPD Detective Division determined that the shooter was Broderick D. Chatmon, Jr (17) of Bogalusa. Chatmon was a back seat passenger in the vehicle with the victim at the time of the shooting. An arrest warrant was issued for Chatmon.

On Friday (November 23, 2018), Chatmon turned himself in at the Bogalusa Police Department, he was arrested on the warrant and booked on the charges of Second Degree Murder and Illegal Carrying of a Weapon.