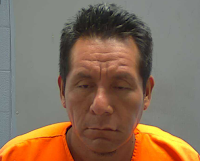 Tangipahoa Parish Sheriff Daniel Edwards reports that on September 23, 2018, Edmundo Ambrocio Reyes (42) of Tickfaw, was charged with Second Degree Murder in the stabbing death of Jonathon Delacruz (27) at their residence on September 21, 2018.

The incident occurred as the result of an argument between the two and Reyes fled the scene prior to deputies arrival. On September 22, 2018, detectives identified Reyes as the suspect in this incident.

As detectives secured a warrant for Reyes's arrest, it was learned that Reyes had been booked into the parish jail on unrelated charges by the Louisiana State Police (DWI and Careless Operation).