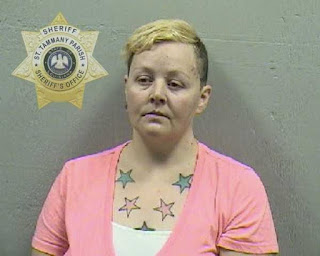 District Attorney Warren Montgomery reports that today (June 15, 2018) a St. Tammany Parish jury found Margaret Stockstill (33) of Franklinton guilty of second degree murder in the death of her best friend’s fiance. Stockstill faces a mandatory life sentence when she appears before District Judge Peter J. Garcia for sentencing August 16, 2018.
The week-long trial centered on what happened the night of April 14, 2017, when Stockstill shot Cody Couch (27) to death. The jury deliberated less than an hour and rejected Stockstill’s claims that she shot Couch in self-defense.
The prosecution argued that Couch, his fiancee Kristen Copeland, and Stockstill planned  to spend the evening together playing cards and drinking at home in Folsom. But Couch left to play pool at a bar with friends and did not respond to Copeland's repeated calls and text messages. Copeland became angry and sent Couch a text that she was ending their relationship and burning his clothes and sent him a photo of the burning clothes.
Couch returned to the house around 10 p.m., an argument broke out between him and the two women, who had once shared a brief romantic relationship. When Stockstill pulled out her gun, Couch threw out his hands and said: “What are you going to do? Shoot me?” Stockstill fired a shot, striking Couch in the lower abdomen. On a cell phone video, Stockstill can be heard saying: “Got your a--!”
“This was a difficult case, but the successful prosecution is due to the thoroughness of the investigation and the preparation of my two Assistant District Attorneys, Blair Alford and Elizabeth Authement,” District Attorney Warren Montgomery said. “We’re blessed to have a high-performance team of prosecutors at the D.A.’s Office.”