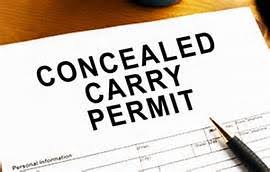 Yesterday (June 14, 2018), Louisiana State Police Detectives assigned to the Bureau of Investigations
New Orleans Field Office arrested Annis Broussard (54) of Slidell and Derrick Jones (47) of Waggaman  suspected of committing Forgery and Conspiracy to Commit Forgery related to concealed handgun permit applications in Louisiana.
Broussard was a NRA Certified Instructor in the Basic Pistol Course and registered as such with the State of Louisiana. Detectives found that Broussard was issuing Basic Pistol Course certificates to individuals that had not actually completed the required course. Further investigation revealed that Broussard was working with Jones who was responsible for providing notarization for the application affidavits.however, Jones is not a notary and was using a notary number that was issued to person suspended in 2015.
Broussard and Jones were conspiring together to scam individuals into paying between $200-$300 in order to expedite their application process. Detectives identified this scam was used nine times.
Broussard’s instructor certification has been revoked though the State of Louisiana and he has been charged with Conspiracy to Commit Forgery. Jones has been charged with 27 counts of Forgery and Conspiracy to Commit Forgery.