District Attorney Warren Montgomery reported that, on Tuesday (February 7), David Peek (56) of Mt. Hermon was sentenced after pleading guilty to forcible rape (35 years), aggravated incest (25 years), and 27 counts of possession of child pornography with children under age 13 (20 years). The sentences will be served at the same time. Peek is required to register as a sex offender if ever released from prison. The victims' families agreed to the terms of the plea. 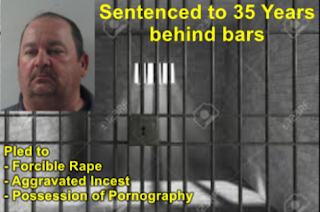 The victim was 8 or 9 years old when Peek began fondling her and then had sex with her in his home. Several years later, a teacher became concerned and notified her parents. After the girl reported the abuse to her father, the family contacted police. Then another victim came forward with reports of inappropriate sexual conduct at Peek's home when she was between the ages of 9 and 12.
Peek had claimed that any inappropriate touching was accidental or happened while he was sleeping. Investigators also found numerous images of child pornography on Peek’s phone.
at 2/09/2017 04:33:00 PM