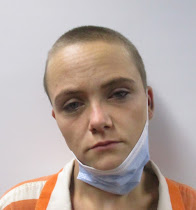 While patrolling today (August 24, 2020) in northern Washington Parish, Washington Parish Sheriff’s Office Lt. Tony Romano and Deputy Noman Taylor were dispatched to the location of a vehicle sitting in the roadway on West Stateline Road. Officers made contact with the driver who was sitting slumped over the steering wheel with a partially loaded hypodermic needle by her side. A field test of the syringe indicated it contained methamphetamine. With permission to search the vehicle, officers discovered marijuana concealed in a purse.

The driver of the vehicle, Anna Elizabeth Jones, age 23 and a resident of Elmer Magee Road, was arrested and transported to the Washington Parish Jail. Jones was booked into the jail on charges of possession of methamphetamine, possession of marijuana, possession of drug paraphernalia and no driver’s license.

Jones has one previous incarceration in the Washington Parish Jail. A May 2017 arrest earned her an overnight stay on charges of possession and distribution of illegal drugs, obstruction of justice and introduction of contraband into the jail.

“This is the second such incident in the past few days,” stated Sheriff Randy Seal. “Drug impaired drivers are a threat to all other persons on the roadway. Whether the driver is impaired by drugs or alcohol, the end result is the same—an unsafe driver needlessly endangering the lives of all others. Good job, Lt. Romano and Deputy Taylor.”