After allegations of sexual offenses against a juvenile, Washington Parish Sheriff’s Office detective 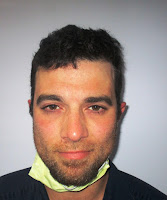 Kody Glenn conducted an investigation in conjunction with the Children’s Advocacy Center that led to an arrest warrant being issued for Eric Brandon Jarrell, age 33 and a resident of Ochsner Boulevard in Mandeville.

On April 16, patrol deputy Phillip Varnado located Jarrell and arrested him at his place of employment in Washington Parish. Jarrell was booked into the Washington Parish Jail on one count of rape, two counts of sexual battery, two counts of indecent behavior with a juvenile and one count of contributing to the delinquency of a juvenile. Jarrell remains in jail with his bond set at $750,000.

Jarrell’s only previous stay in the Washington Parish Jail was in 2009 on a charge of domestic violence. He was released on that charge after posting a $1,000 bond. According to the Washington Parish Sheriff's Office, Jarrell admitted that he was arrested earlier this year in St. Tammany Parish on drug charges.

“Protection of our children is one of the primary goals of the Washington Parish Sheriff’s Office,” stated Sheriff Randy Seal. “We will always vigorously pursue any person who commits a sexual offense against a child. Based on the facts of this matter, Jarrell is exactly where he deserves to be—in jail.”
at 4/17/2020 11:59:00 AM