Shortly after 2:00 pm on September 20, 2019, the Louisiana State Police Bureau of Investigation was 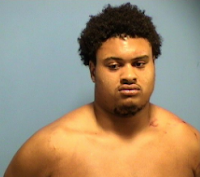 Preliminary investigation revealed that the incident occurred as a Mandeville Police Department Officer initiated a traffic stop on a vehicle. As the driver refused to stop, a pursuit ensued along U.S. 190 in Mandeville. During the course of the pursuit, the suspect’s vehicle crashed into the ditch along the U.S. 190 southbound off ramp to LA 22. As the incident unfolded, both Mandeville Police Department officers were shot by the suspect.

The suspect, identified as 21 year old Mark Spicer of Covington, has been charged with one count each of First Degree Murder of a Police Officer, Attempted First Degree Murder of a Police Officer, Aggravated Flight from an Officer, and Possession of Stolen Property (firearm). A passenger in the suspect’s vehicle sustained minor injuries in the crash. The investigation remains active and ongoing and no further information is available at this time.