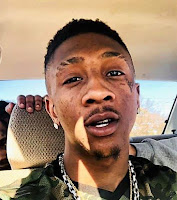 Robbery and Aggravated Assault that happened on June 14, 2019. Three black males in a black sedan robbed an individual at gunpoint and then assaulted the victim with one of the firearms.

One of the suspects was identified as Cedric “Lil Ced” May. May is described as a black male with multiple tattoos, 5' 10”, 145 lbs., and 26 years of age. May is associated with the street gang, Vice Lords, and his last known address was 1664 Hwy 583 North, Jayess, MS.

May is currently wanted by the WCSO for Armed Robbery, Aggravated Assault and Conspiracy to Commit these crimes. May also has a warrant with the Mississippi Department of Corrections.

WCSO is seeking the public’s assistance in identifying the two (2) other suspects and the whereabouts of all three. Anyone with information is asked to contact the Walthall County Sheriff’s Office at 601-876-3481 or Crimestoppers at 601-467-1878.