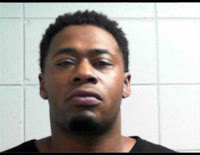 Bogalusa Police Department officers responded on Monday, September 10, 2018 to the Power Food Store on Sullivan Drive after receiving a call of a person shot. Officers found a male victim with a single gunshot wound to his lower back. The victim was transported by ambulance to North Oaks Hospital in Hammond. The shooter had fled the scene.

A witness on the scene reportedly identified the shooter as Charles L. Smoot Jr (36) of Bogalusa. BPD officers also reviewed the store's video surveillance footage which reportedly showed the victim having a confrontation with Smoot, who was recognized by the BPD officers. A warrant was issued for Smoot's arrest.

Smoot was booked on the charges of Attempted 2nd Degree Murder, Possession or Carrying a Weapon by a Convicted Felon, Illegal Use of Weapons or Dangerous Instruments, Illegal Carrying of Weapons and Aggravated Battery. Smoot was also arrested for an active attachment for Failure to Appear in the Bogalusa City Court.