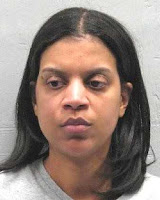 District Attorney Warren Montgomery reports that a St. Tammany Parish jury found Cindy T. White (41) of Slidell guilty Wednesday (April 18, 2018) of theft of identity over $1,000 for stealing another woman’s identity via social media. White faces up to 10 years when she is sentenced by District Judge Scott Gardner on April 24, 2018.
An employee of Diversified Foods and Seasonings contacted the STPSO in April, 2016 about White, who had provided a fraudulent resume, social security number, and driver’s license number to get an executive level job. They hired White in September 2015 as a human resources manager at $95,000 per year and promoted her five months later with a salary of $105,000.
As it turns out, White had copied credentials, a Social Security number, and Drivers License number from a resume copied directly from the Linked In account of someone with a similar name. The educational credentials included a bachelor’s degree from Tulane University and a master’s from Hebrew University in Jerusalem. Company officials became suspicious, though, when White had trouble performing duties within the educational level and experience listed on her resume, and when she began delegating many tasks assigned to her.
When investigators tracked White’s real Social Security number, they learned she had been arrested in New Orleans in February 1997 for theft, forgery, and malfeasance in office. At the time, White worked for the Orleans Parish Sheriff’s Office and was accused of assuming a co-worker’s identity and emptying the victim’s bank account, before being identified by surveillance photos. White pleaded guilty to two counts of forgery on September 27, 1997, and was placed on probation. But court records indicate her probation was terminated in 1999 because the court received information that she was deceased. White also had pleaded guilty in Jefferson Parish to attempted theft of goods on December 4, 1998.
White admitted in a statement to investigators that she fraudulently used the victim’s educational experience and Social Security number to get the job. But her defense attorney argued during the trial that she actually earned the salary.
Jurors deliberated just 15 minutes before returning the guilty verdict.
at 4/20/2018 02:09:00 PM